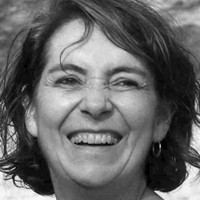 Raised in Paris, she moved 1977 to Germany. She received an MA in art history in1985 (University of Freiburg im Breisgau), and a PhD in 2008 (HBK Braunschweig).

1996-2001 she ran her own commercial gallery for emerging artists in Berlin Mitte (with Daniele Buetti (CH); Åsa Elzén (S); Miguel Rothschild (ARG); Barbara Trautmann (D) etc.), presenting over 50 exhibitions in 6 years.
2004-2006, she was on the selection panel and provided curatorial support to the artists of Arts Council England’s Berlin residency.
2008 she completed her PhD-thesis on the Dada montages of Erwin Blumenfeld (1897-1969). The book was published by Hatje Cantz. In spring 2009, she curated a Blumenfeld exhibition at the Berlinische Galerie, Berlin.

Starting 2014, she cares for the estate of NÄNZI (1962-2013), a figurative sculptor who was based in Berlin.
She has been giving workshops and coaching for artists with bbk since 2011. She writes, curates personal and group exhibitions, holds opening talks, is a frequent jury member for art prizes and residencies, and works as an art consultant.
Helen publishes on contemporary art and emerging artists, photography, Dada and the Avant-garde. She is interested in all visual, philosophical, and musical media. For the last years, her academic focus has been on the Avant-garde and its relationship to contemporary practice. She also works as a translator from German into English or French.
She knows the art world both from the institutional and the commercial side.

Helen is fluent in English, French, and German.

Help! They’re coming … Be prepared for a studio visit!

Editions and Multiples. How to deal with them?

A Guide to Berlin's Art Scene for Newcomers