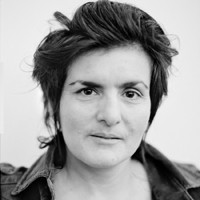 Vassiliea Stylianidou works as a video and installation artist, using in her* works related artistic media such as text, sound/voice/music and performance. Her* artistic process involves a constant renegotiation of public and private history, as well as public and private spaces.

Her* work deals with the limits inherent in systems of order and discipline such as language, architecture, body, power, labour, family, and gender. Especially in relation to language, she* is interested in ways of using it that challenge and subvert its everyday use in an attempt to suggest new paradigms for knowledge and experience. In her* video and installation work, she* employs texts that take on a poetic form and enter into dialogue with contemporary political philosophy, the Lacanian theory of the unconscious, as well as with elements from current news items.

Stylianidou also explores the interconnections between, on the one hand, language and, on the other, the voice, the body and the image as rhythm and materiality.

She* employs elements from the genre of the spoken word as well as from experimental and underground music and poetry movements.

The exacerbation of the European (and global) sociopolitical and economic crisis, primarily visible in the European south, lends renewed relevance to the question of “How can art pave new roads for thought and put new artistic practices to the test?“

Since 2012 with a series of textile- and text based installations where she* makes use of fabric bolds, texts,  voice and rhythm/music she* has been initiating the collaboration with a Greek textile export company. In this series of works-in-progress Stylianidou investigates the relation of poetical and artistic thought with the reality of (artistic) labour and economy.

In 2012, parallel to her* individual work, she* founded the collaborative format STUDIOvisits Berlin.
http://studiovisits-berlin.tumblr.com/

Since 2018 she is co-curator of the queer feminist project Aphrodite*. https://aphroditeproject.org/